Traditionally, there have been three types of backups: full, incremental and differential. All of these types have their strength and weaknesses and therefore, administrators have to weigh each option to see which works best for their scenario. While these three methods are most common and widely used, this article introduces a fourth type: reverse incremental.

An important feature when backing up important data is the ability to restore previous versions. Therefore, every type is compared with respect to its ability to maintain several versions of the data. .

As the name implies, a full backup is an exact replica of the source files.

No intelligence is needed by the process running backups. Files are simply copied to the destination without any time spent computing what has changed. 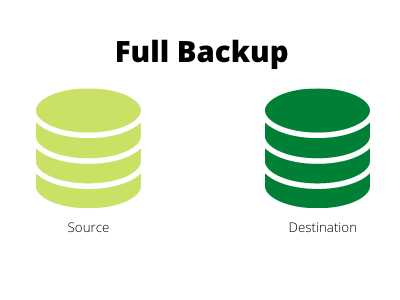 Incremental backup retains a full copy of the initial backup and subsequent backups contain changes since the last backup. For example: 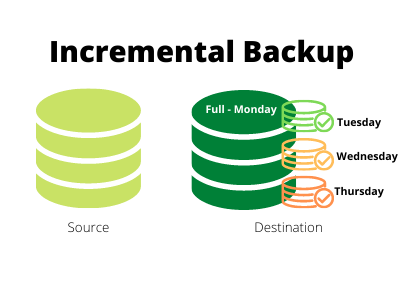 Differential backup are similar to Incremental with a subtle difference: subsequent backups do not rely on intermediate copies. Instead, they are built on top of the first full backup. For example: 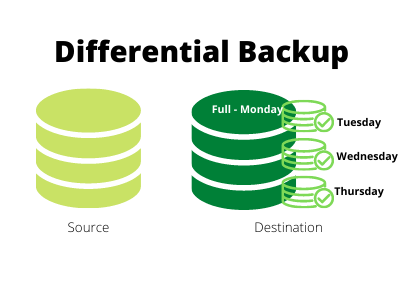 This is similar to incremental backup but in reverse direction. Meaning the most recent copy of the backup is always saved as full. Previous versions are stored as deltas on the destination. For example:

Intelligence is needed on both source as well as destination. First, source calculates the delta and sends it to the destination. This incoming delta is merged with the previous version to create a full backup. 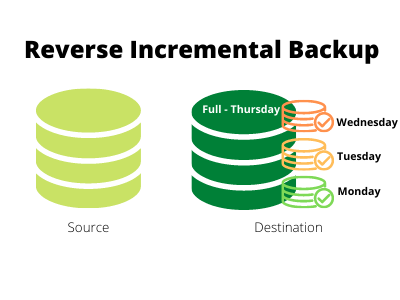 Comparing All Of Them

The following table illustrates a comparison of every type. Each type has been assigned a score from 1 to 5 based on its efficiency in that category.

How To Create Reverse Incremental Backup

The chart displayed above clearly shows the Reverse Incremental method is the best. One way to create such backups is to use Hard Links on Linux/Unix. However, using this technique is not for everyone as it requires in-depth knowledge of how the file system works on the OS.

An easier option is to use a software like Syncrify, which automatically creates backup versions using Reverse Incremental approach mentioned above.

This blog compares the different backup types used in the industry. It uses a scoring mechanism to determine which method is the best. The clear winner is Reverse Incremental Backup, which not only saves tremendous disk space but provides the most flexibility when you want to restore or access these files.