Many new features and updates to existing features have been added in Version 9.0. These changes are listed below Following is a list of new features in WinSQL version 9.0

Click here to watch a video on this subject
Named query is a convenient way of executing a SQL query even if you are not connected to a database. Additionally, you can embed a named query within another SQL statement.

Following steps demonstrate how to create a Name Query

Named queries store connection information besides the SQL for queries. Therefore, if you need access to the results of a query very fast, consider saving that query as a Named Query.

Steps to accomplish this task

The following points should keep in mind when running cross database queries.

WinSQL includes the ability to add custom code templates that can improve speed and consistency for writing SQL scripts. To use these templates write the starting characters of the template and then press CTRL+J.


select *
from students
where active = 'N'
and joindate > ::BeginingOfYear


The objective of this query is to find all students who joined in this year but are not active. One way to accomplish this goal is to prompt the user for the actual date.

Using code templates you can just enter boy, which stands for Beginning of year, and hit CTRL+J to let WinSQL automatically insert the value for the January 1 of the current year.


select *
from students
where active = 'N'
and joindate > boy+CTRL+J
When you click type CTRL+J, WinSQL will replace boy with the actual date and the final query will look like:


TIP: CTRL+J is the default shortcut for pasting code templates. You can change this value by Customizing shortcuts under the Tools menu.

To add new templates, click Code Templates under the Tools menu, which brings up the following screen. 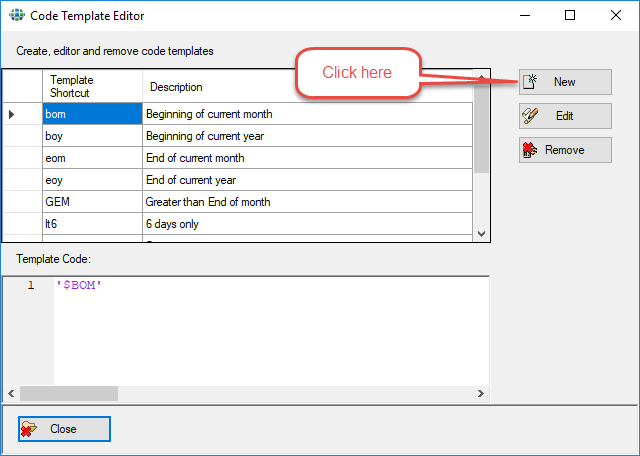 This screen lists existing templates. WinSQL automatically adds a handful of templates that you can use, which you see on the screen. 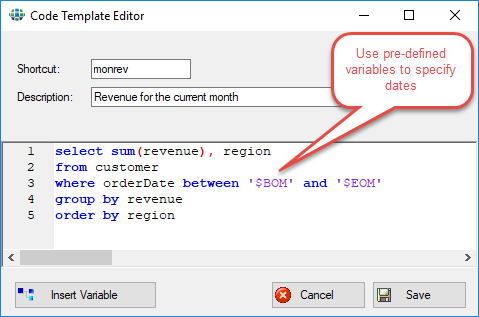 Intelli-Tips have been enhanced to filter data as you type object names. Previous versions of WinSQL used to display every object making it difficult to find the desired object easily. Now it filters the data as you type a partial name